The Story of RIFT

Recently we had a sneak peak at RIFT, the new MMO from Trion Worlds and we also had the chance to sit down and speak with lead content developer William Cook at the launch event. We've been quietly excited about RIFT for some time, having had the chance to play during the BETA events. We've also seen a rising level of expectation in the general MMO community as the game got closer to its launch date.

The head start programme, for players who pre-ordered the game, ran from the 28th February and many people with this access that we've spoken to are enjoying it immensely, however you might expect that since they've paid up front for RIFT. Now the game has launched in both the US and EU and is open to all new players so today, after some significant play time, we have our full review. 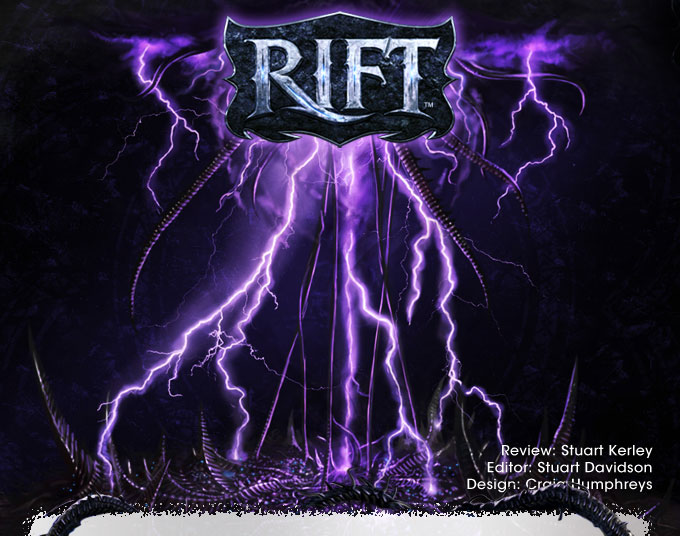 RIFT is a persistent fantasy MMORPG (massively multiplayer online role playing game) set in the world of Telara. Telara is a world at conflict with itself, not only are the two key factions engaged is a bitter protracted war, the land itself is being ripped apart by tears in the fabric of the universe allowing monsters from the elemental planes to rush Rift Gold into the world.

In Telara two aforementioned factions, the Guardians and the Defiant, are opposed in their beliefs. The Guardians are fated by the gods, returned from the afterlife to keep the lands of Telara safe. The Defiant on the other hand have forsaken the gods and have put their faith in the hands and ingenuity of man and we can choose either side when creating our character. The playable races available are all humanoid in form, we don't have any orcs or undead in Telara so for the Guardians we can select from the stout Dwarves, the High Elves or the Mathosians. The Defiant are able to choose from the Bahmi, the Eth or the Kelari.